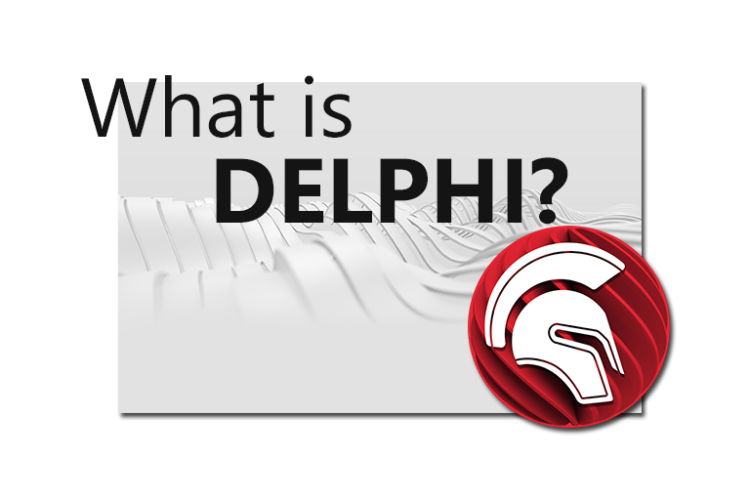 Delphi is an IDE, currently developed and maintained by Embarcadero, but a special one. Currently, there is a great variety of IDEs, each with their own strengths, weaknesses and features. Moreover, nearly every major programming language has a specific IDE built to suit it best, for example,  for Python it is PyCharm, for Java it is Eclipse, and many more examples.

So why is Delphi special when compared to all others? Well, some would argue that Delphi simplifies the process of UI/UX design the most, when compared to its competitors. At first, Delphi might seem as a complicated IDE. It uses a Delphi dialect of Object Pascal, which sounds rather scary and complex to beginner-intermediate developers. However, the power of Delphi GUI editing tools, opens up the opportunity to create advanced and interactive applications for nearly all major platforms with very few lines of code!

Let’s dig a little deeper. We will examine Delphi’s major strengths, and weaknesses, so you would have a more holistic idea of it.

First and foremost, as mentioned above, the main strength of Delphi is its tools to work with the GUI. You do not need to code on your own each time you want to add a button, drop down list, scrollbar and many more GUI elements. Instead, you can take advantage of having all of that already built-in in Delphi. You can quickly move through the design stage of your application, and focus on the back-end. With Delphi, it is easy to prepare all the GUI’s prior, and then just Toggle the settings (such as Visibility for example) in run-time.

This not only makes your code cleaner, more concise and efficient, but also takes the hassle out of struggling to make all GUI elements nicely aligned, sized, positioned, etc via pure coding (but you still have such an option when developing in Delphi). Moreover, there are built-in event handlers in Delphi, saving even more time and effort when it comes to coding.

On the other hand, the above mentioned benefit may be very hard to get used to at first. For example, if you are transitioning from purely Python based development, chances are, you are more used to coding everything in. Therefore, the idea of first designing everything and in the coding phase only connecting everything, might be hard to grasp at first. Moreover, the logic of Object Pascal, most importantly its syntax and the formalities of the language differ from Python. Python is a bit more chaotic when it comes to its coding structure. Especially due to more freedom when declaring variables and assigning values to them. Object Pascal is a bit more demanding in that sense. However, you will get used to it quickly as it is very intuitive.

Another major strength of Delphi is the availability of plenty of different components. Each component adds a big extension to the functionality of what you can do in your application. One of such components is TsiLang. You can check out the blog post about it to learn more. For now, let’s use it as an example to discuss this particular strength of Delphi. Components are essentially Plug-Ins, however, some would argue they bring way more functionality than the traditional Plug-Ins in other software. For example, after adding the TsiLang Component Suite to your Delphi IDE, you can use a great range of tools and methods built-in to TsiLang to manage translations for your application. Moreover, plenty of components, such as TsiLang, even feel like stand-alone applications due to the extent of the tools and functionality that they bring.

On the contrary to the above mentioned strength, it is not as intuitive to install Components into Delphi. There is more than one way to do so. So for example if you are to do it through a built-in Getit Package manager, it would be fairly simple and straightforward. However, installing your very first component manually, might prove to be a bit not as intuitive and complex, but there is plenty of documentation available. Most of the component creators, like SiComponents, provide great manuals and support when it comes to making the whole process smooth, therefore, no worries.

So… Is Delphi Right for You?

Overall, Delphi is a great and powerful IDE. Unfortunately, it is available only for Windows, but you can build applications for all other platforms. We suggest you to definitely try out Delphi, as that will surely optimise and improve your development, due to a variety of GUI management tools, and available components, such as TsiLang. In the meantime, make sure to check out our other blog posts and follow us on LinkedIn to not miss any updates!