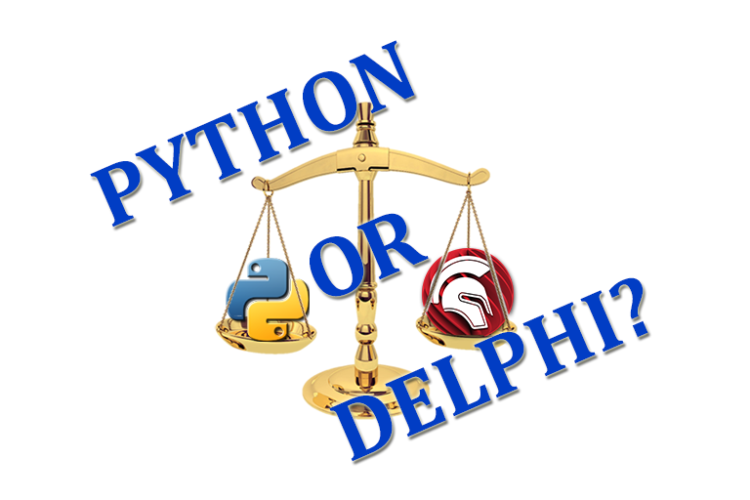 Nearly everyone in the industry knows or even uses Python, however, Pascal still exists, and for a good reason. Moreover, the majority of new, young developers do not have a solid and correct idea about Pascal. In particular, what represents as a language, and why it can be a language of choice for some developers. During today’s blog, we won’t dive deep into the definitions of either language. However, we will examine the pros and cons and try to establish some recommendations to possibly give you an idea which language attracts you most.

Even though Pascal is not very popular, it is probably the most suited for creating and working with GUI. You can effectively use it in the IDE such as Delphi. Delphi simplifies and equips the developer with a variety of ways to manage the GUI. This benefit of Pascal is even more relevant considering the current trend in the industry. Nowadays, the UI is one of the most crucial factors determining the success of the application or software. Nevertheless, it is worth mentioning that even though Pascal has the tools, you still need to learn them. Just like with anything, with no knowledge and practical experience, no good level of output can be achieved.

The Whole World is Learning Python

Python was ranked the number one programming language via PYPL index in 2021, for mainly two reasons. It is extremely beginner friendly, which makes it one of the most accessible and easiest to learn languages. Due to this, the second reason arrives, the whole world is learning it. Due to a large population of students and developers, Python has the most tutorials available for free online. The community is enormous and active, which allows anyone to find help and guidance via forums. Availability of support through forums strengthens the beginner’s confidence in learning Python, as he or she does not waste much time looking for the most effective solution.

Pascal is The Flash of Programming

Due to some elements of the code in Pascal, which we will not cover in this post, it is incredibly fast and optimised when it comes to compiling it. On top of that, it is possible to easily combine the Pascal code into a single .exe file. This advantage of Pascal may not sound too attractive to a fresh beginner developer, yet anyone with a decent experience in development would understand how valuable this benefit is.

According to Quartz, an average Python developer has a salary of $100 000, and it is one of the most in-demand languages out there, as plenty of big corporations rely on it, an example being Google. Additionally, considering the previously mentioned advantage, being the ease-to-learn, it really builds up the motivation to learn the language, having seen how realistic and easy it is to find a job with it.

No Longer Trending Complexity of Pascal

Everything and everyone in IT strives to be as simplistic and efficient as possible. The main downside of Pascal, is that it seems to be stuck in the 2000s in terms of the difficulty and complexity of its syntax. Some elements of it could be easily updated to the current standards, for example, begin-end could be easily replaced with {}. Some developers view Pascal as an unnecessarily heavy language, and that could be the reason that beginners decide to stay away from it.

Too Abstracted Does Not Guarantee to Be Beneficial

As said before, Python is very simple, mainly due to how abstract it is. Even though it may not be too apparent of a disadvantage for early beginners, the longer you develop with Python, the more cases of impossible to understand or debug codes of others (colleagues or partners) due to the extremely high level of abstraction. The structure of the code in Python is conventional, resulting in some developers not following it, which makes their code difficult to interpret for others. Furthermore, after starting with Python and getting used to how abstract it is, it is harder to learn lower-level languages (Pascal being an example of it), while the other way, the whole transition is much easier and smoother.

So, Which One Is It?

Ironically, even though both are programming languages, it is impossible to pick only one out of the two. The only recommendation we can make is to weigh the pros and cons. After that you will be able to decide which factors are more crucial for your own personal development needs. Moreover, we recommend taking a look and trying to get the basics of both of them regardless. You never know what you might be tasked with later on in your career. It is beneficial to be aware of which language might be the key to solving a particular challenge.

Thank you for taking your time to read this blog post! Follow us on LinkedIn to make sure you do not miss out on any updates. In the meantime, feel free to check out our other posts!